Tropical Cyclone “Chalane” is expected to make landfall along the coast of Mozambique in the Sofala Province on 30 December 2020. Given the projected severity of the storm at landfall, the Mozambique Red Cross has activated its Early Action Protocol to initiate early actions to prepare for the approaching cyclone. The protocol was developed with the support of German Red Cross, and the Red Cross Red Crescent Climate Centre. Funding for the activation (249,000 CHF) was made available by the IFRC’s Forecast-based Action by the DREF financial mechanism.

Tropical Cyclone Chalane is currently located in the Channel of Madagascar heading towards Sofala Province in Central Mozambique. Chalane is expected to intensify and make landfall along the coast on Wednesday, December 30th, bringing torrential rains and wind speeds of up to 117 km/h with gusts between 125km/h and 165km/h. The Mozambique Red Cross (CVM), with support of the German Red Cross (GRC), is taking urgent early action to support the affected population in reinforcing school buildings and houses, and in ensuring people’s access to clean water.

Chalane was being monitored by CVM and national authorities since as early as December 22nd – when it first formed as a tropical depression. Throughout the following days, Chalane gained strength, crossed Madagascar as a severe tropical storm and is now moving westwards towards the coast of Mozambique. The Mozambique National Institute for Meteorology (INAM) had indicated a significant chance for the storm to rapidly intensify on its passage. As a result, on the evening of December 27th, the Mozambique activated its country-wide cyclone Early Action Protocol (EAP) 72 hours ahead of expected landfall and initiated the implementation of early actions. 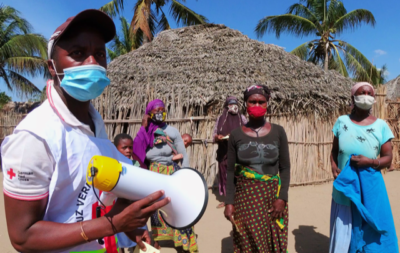 The most severe impact caused by Chalane is expected in the coastal districts of Buzi, Dondo and Muanza of the Province of Sofala, as well as the provincial capital Beira. This area had already been devastated by Tropical Cyclone Idai in March 2019 and again hit by severe flooding in February 2020. In the ongoing intervention Buzi District is prioritized as the area where – according to vulnerability data and the current forecasts – assistance will be most needed.

“Through the early disbursement of funds, Mozambique Red Cross is able to reach vulnerable households before humanitarian access is likely to become difficult. At the moment communities are being warned and sensitized and vulnerable housing structures and school buildings identified and reinforced to better withstand the strong winds with the help of our Red Cross volunteers. Non-food Items such as water purification tablets and jerry cans, are being distributed to avoid use of unsafe drinking water after cyclone impact. Acting early will buffer the impact of Chalane on a district that is still recovering from the severe impact of Cyclone Idai and in a context of increased socio-economic vulnerability due to the Covid-19 pandemic.” Anna Lena Huhn, Regional FbF Delegate Southern Africa, German Red Cross.

The early actions will be implemented before Chalane’s predicted landfall on Wednesday. Cyclones in Mozambique often cause widespread damage in coastal areas and severely impact communities by destroying houses, crops and assets and causing significant damage to public infrastructure. Furthermore, torrential rains and flooding associated with the cyclone typically lead to increased risks of water- and vector-borne diseases such as malaria, cholera, and diarrhoea. For poor and vulnerable populations these impacts severely affect their lives and livelihoods. Beneficiary communities were chosen based on a risk assessment identifying the most vulnerable groups combined with the projected path and wind speed of the cyclone. 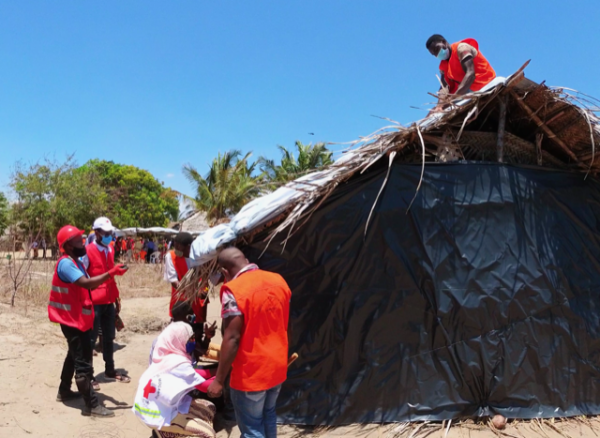 Mozambique Red Cross volunteers assist the communities in strengthening their houses, so they have a better chance to resist the storm. Photo taken during a recent simulation exercise. © Mozambique RC/GRC

“If Cyclone Chalane does make landfall on Wednesday, the Red Cross will have contributed to limiting its impact and will also be in a better position to execute more effective rescue operations. As a first for Africa, we see this as paving a new way for dealing with disasters in the future,” said Cristina Uamusse, Secretary General from the Mozambique Red Cross.

The early actions are being implemented in a situation where livelihoods are already compromised due to ongoing COVID-19 pandemic, and heightened levels of vulnerability can be expected. However, CVM and GRC have also worked on integrating protective measures against COVID-19 in their early action planning since June 2020 with the aim to assist communities while reducing the risk of transmission of the disease and ensuring their volunteers’ safety.

Forecast-based Financing (FbF) has established mechanisms to automatically allocate funding for early action once forecasts indicate a high probability of an extreme weather event. The goal of FbF is to anticipate disasters, prevent their impact, if possible, and reduce human suffering and losses. A key element of FbF is that the allocation of financial resources is agreed in advance, along with the specific forecast threshold that will trigger the release of those resources for the implementation of pre-defined early actions. The roles and responsibilities of everyone involved in implementing these actions are defined in an Early Action Protocol (EAP). The Mozambique Red Cross, the German Red Cross, the IFRC, the Red Cross Red Crescent Climate Centre, the Belgian Red Cross Flanders and local authorities developed the Mozambique Early Action Protocol for Cyclones in 2018. It was the first EAP in Africa was accepted by the FbA by the DREF. Also see our Fact Sheet for more information. The FbF project in Mozambique is funded by the German Federal Foreign Office.