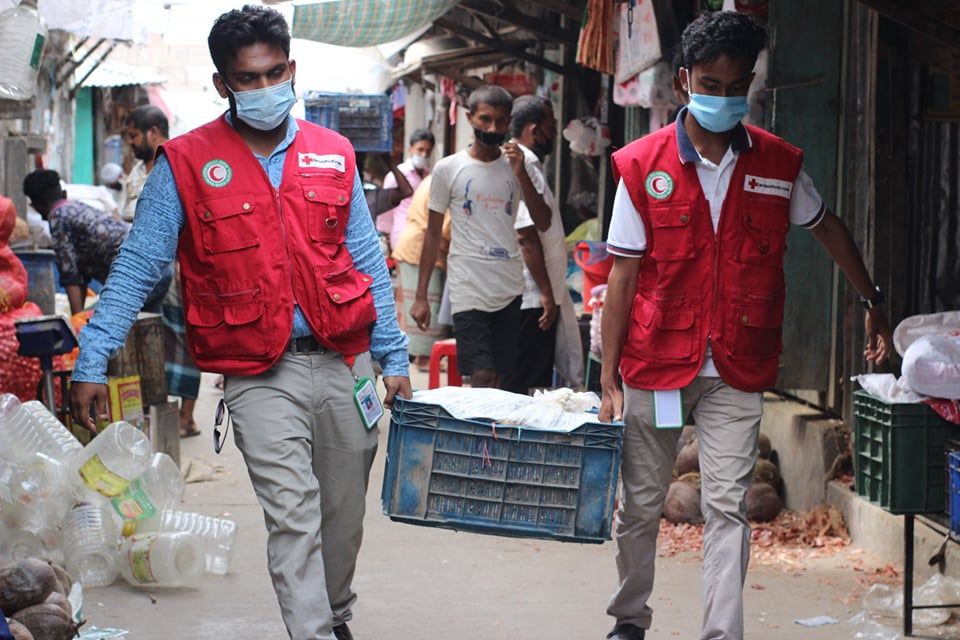 Cyclone Amphan is expected to hit the western regions of Bangladesh  on Wednesday, 20 May 2020 with core wind speeds of 160 km/h and gusts of up to 180 km/h. The Bangladesh government’s Cyclone Preparedness Programme (CPP) has started evacuating thousands of people. As part of the Forecast-based Financing (FbF) project, the German Red Cross (GRC) and the Bangladesh Red Crescent Society (BDRCS) are supporting these evacuations, helping the population to rbring their livestock and belongings with them to safety, and ensuring availability of food and water at cyclone shelters. Both the trigger and the early actions were pre-defined in BDRCS’ Early Action Protocol for cyclones. Special precautions are being taken due to the current Covid-19 context. The early actions are funded by the International Federation of the Red Cross and Red Crescent (IFRC) Forecast-based Action by the Disaster Relief Emergency Fund (FbA by the DREF).

The FbF team has been monitoring cyclone forecasts over the past week. As soon as the pre-defined trigger was met on 18 May 2020, the team deployed staff and volunteers to at-risk communities in the 9 districts of Shatkhira, Khulna, Bagerhat, Potuakhali, Pirojpur, Borguna, Bhola, Noakhali, and Lakshmipur to assist the population in protecting themselves and their livelihoods from the impacts of Amphan. The FbF team in Bangladesh, with support from the Red Cross Red Crescent Climate Centre combined the forecast with  exposure and vulnerability data (poverty, housing type, number of family dependents) to prioritize communities, in which more than 25% of houses are expected to be severely damaged for early action. 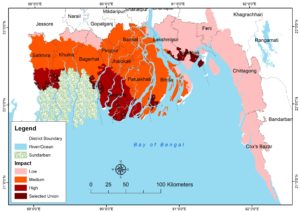 With support of GRC, BDRCS volunteers and staff that will support up to 20,000 people being evacuated to 40 cyclone shelters in the 9 districts. “Last year our team assessed potential 1500 cyclone shelters in a survey, looking at factors such as functionality, stability, accessibility and capacity. We are sharing this info with CPP and it helps us now to identify a sufficient number of well suited shelters quickly”, said Damodar Kanel, GRC’s FbF-Delegate in Bangladesh.

As parts of the early actions, BDRCS, with the support of volunteers from the Cyclone Preparedness Programme (CPP), will:

1) Support the evacuation of people, their livestock and moveable assets (by providing transport);

2) Distribute food and water in the cyclone shelters;

3) Provide basic first aid services at the cyclone shelters for injuries and sickness.

Evacuation of large numbers of people in a few hours in areas with inadequate roads is challenging in ideal circumstances. Currently, CPP and BDRCS also have to account for Covid-19 and early actions were adapted in the following ways:

Forecast-based Financing (FbF) has established mechanisms to automatically allocate funding for early action once forecasts indicate a high probability of an extreme weather event. The goal of FbF is to anticipate disasters, prevent their impact, if possible, and reduce human suffering and losses. A key element of FbF is that the allocation of financial resources is agreed in advance, along with the specific forecast threshold that will trigger the release of those resources for the implementation of pre-defined early actions. The roles and responsibilities of everyone involved in implementing these actions are defined in an Early Action Protocol (EAP). The Bangladesh Red Crescent Society, the German Red Cross, the IFRC, the Red Cross Red Crescent Climate Centre and local authorities developed the Bangladesh Early Action Protocol for Cyclones over the past year. The FbF project is funded by the German Federal Foreign Office.