Coldwave Early Actions put to the test in Kyrgyzstan 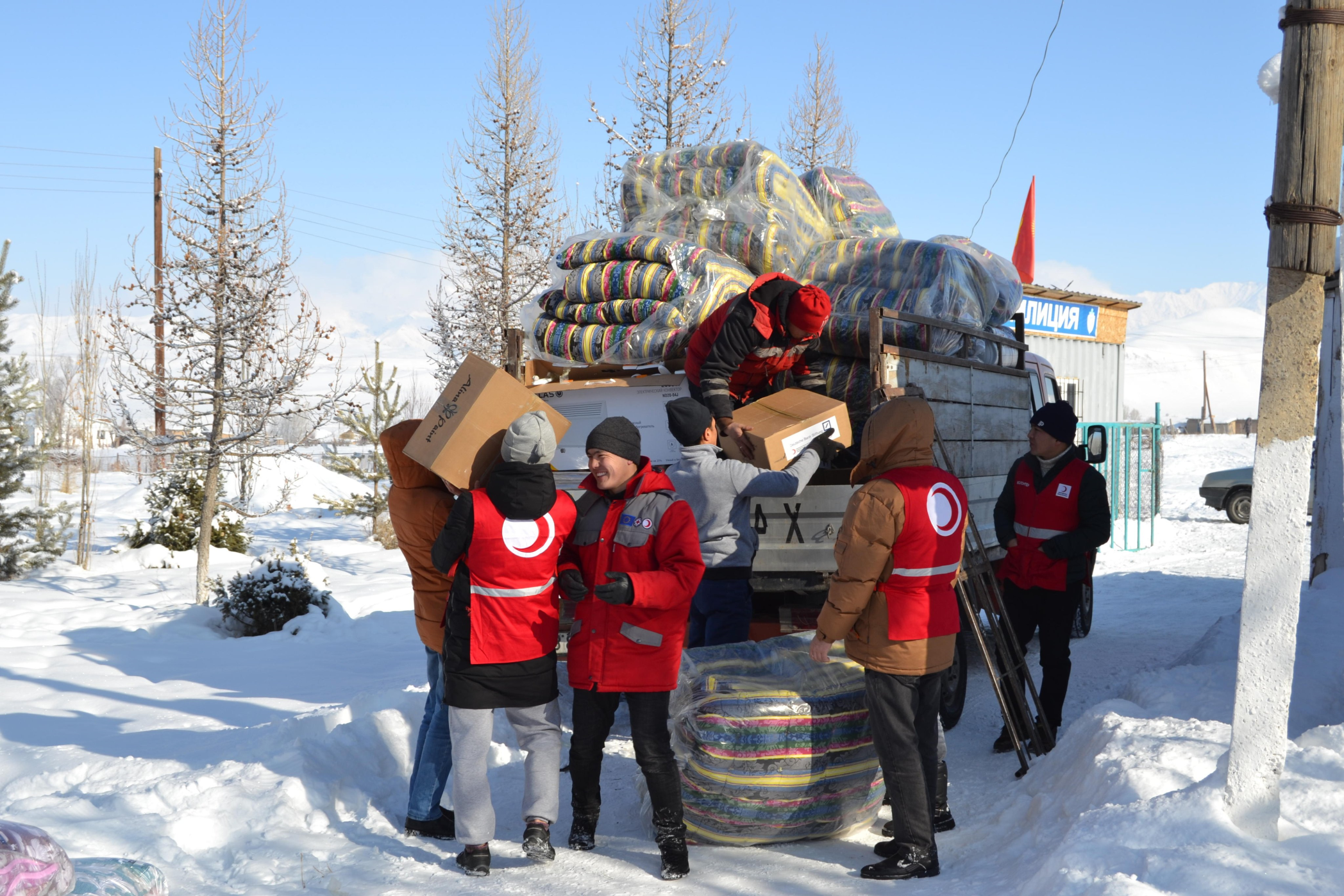 The FbF project team  piloted early actions in the Kyrgyz province of Naryn on January 13, 2020, in response to the official five-day weather forecast provided by the National Hydrometeorological Service, Kyrgyzhydromet. According to the forecast, temperatures in Naryn province were predicted to drop to – 23℃ by the end of the week, close to the predefined FbF Early Action Protocol threshold for cold spells in this province (-28 ℃).

The aim of the coldwave simulation was the timely distribution of coal, food packages and other essential non-food items (NFIs), such as blankets and radiators in pre-selected Naryn Province municipalities. The drill provided an opportunity for the Red Crescent Society of Kyrgyzstan (RCSK) to evaluate the effectiveness of planned “early action” measures to reduce the impact of extreme cold spells on the local vulnerable population.  In addition, the simulation allowed the RCSK to test their response capacity and coordination with the local disaster management authorities.

Based on  the weather forecast received from Kyrgyzstan-Hydromet, the FbF team began preparations for the transportation of relief supplies to Naryn province. The whole simulation was closely coordinated between the FbF project team, the RCSK headquarters, the staff of the RCSK-Naryn branch office, local authority representatives (e.g. community leaders, specialists from the social welfare department, etc.) and the suppliers of goods and services.

On January 16, 2020, the FbF project team arrived in Naryn province with NFI and food parcels, while the staff and volunteers of RCSK-Naryn Branch Office completed the distribution of coal in three target villages of Naryn sub-district (Tash-Bashat, Kayindy and Eki-Naryn) by the end of the same day.

The distribution methods were combined, with in some cases, the goods being delivered to the homes of the vulnerable people and in other cases the assisted people with relief from distribution points organized in the target villages by the community leaders. The distribution of the goods was organized according to the list of the most vulnerable families in each target village, drawn up and approved by the representatives of the local authorities, in collaboration with the social welfare departments at local level and the RCSK team. RCSK staff and volunteers augmented discussions  with the conduction of household interviews,, and needs assessments to ensure those most vulnerable received assistance.

The food parcels distributed consisted of the goods per target family, such as flour, sugar, tea, salt, macaroni, rice, buckwheat, beans, and vegetable oil. While the NFI package consisted of a set of mattresses (four pieces), set of blankets (four pieces), floor insulation material (20 square meters), as well as the electric heating, window insulation materials and coal in a set of 7 bags per family (1 bag corresponded to 34-35 kg).

The simulation allowed for many learnings, and most importantly, through FbF cold wave early actions, served a total of 100 endangered families (about 400 people).

The Forecast-based Financing pilot project has been launched in 2019. The focus is on the development of Early Action Protocols (EAPs) in order to mitigate the impact from cold waves and heat waves in rural parts of Kyrgyzstan and Tajikistan. Through these EAPs, the Red Crescent Societies of both countries will be able to draw on the Forecast-based Action (FbA) by the DREF fund of the IFRC in Geneva whenever weather forecasts reach critical thresholds for approaching natural disasters.

For more information about the project, please click here.