Skip to content
Vietnam Update #7: The Trigger Protocol for Heatwaves in Hanoi 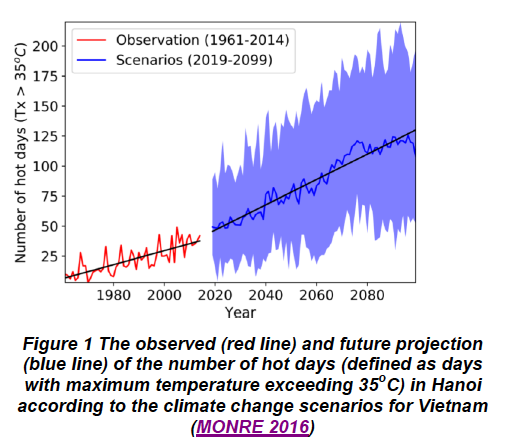 This contribution by the Vietnamese Red Cross and German Red Cross FbF project on heatwaves describes the steps taken for Trigger development. The full report can be found here.

In July and August 2019 in Hanoi, VNRC and GRC carried out anticipatory actions to reduce the impact of heatwaves on the most vulnerable people. When to act is decided according to triggers, or weather forecasts that exceed predefined threshold values  (danger levels).

To develop the trigger threshold, the Institute of Meteorology, Hydrology and Environment of Vietnam (IMHEN) conducted a study on historical events recorded (1961-2018) and future heat trends (2019-2099), showing that the frequency and duration of heatwaves have increased in the last 58 years and are projected to further increase.

The heatwave forecast is based on both maximum temperature and Heat Index (a combination of air temperature and relative humidity). The relative humidity is considered because a high humidity reduces the sweat evaporation rate in the skin, one of the main mammals´ thermoregulation mechanisms, preventing the human body from dissipating excess heat and cooling down, and therefore increasing the perceived temperature and a higher probability of heat related illnesses and heatstroke.

Since there´s no impact data of heatwaves in Hanoi (and data is difficult to access), IMHEN carried out a risk analysis which considers the most extreme historic heatwaves in Hanoi. This leads to a 2×2 trigger protocol.

Two components of the trigger:
The first component of the trigger is based on the 99th percentile value of the Heat Index (from historical data), ensuring that the Early Actions are only implemented with extreme heatwaves. The second component is a 37 °C maximum temperature threshold, provided by the National Centre for Hydro-Meteorological Forecasting (NCHMF).

Two steps of checking forecast trigger:
Only when the Heat Index reaches 99th percentile value of the Heat Index for 2 consecutive days, and the maximum temperature forecast is higher or equal than 37 °C, both 6 and 3 days before the forecasted extreme heatwave, the Early Action Protocol is activated and funding for the implementation of the early actions is automatically released.

An automatic warning is sent to VNRC each time a trigger is reached.

Thanks to the collaboration and expertise of IMHEN, VNRC and GRC, action is taken on the right moment and on the right place. In 2020, VNRC and IMHEN will replicate the project in other urban areas of Vietnam, and will use the FbF approach for other disasters.

The whole report can be found here:

Update #7: The Trigger Protocol for Heatwaves in Hanoi